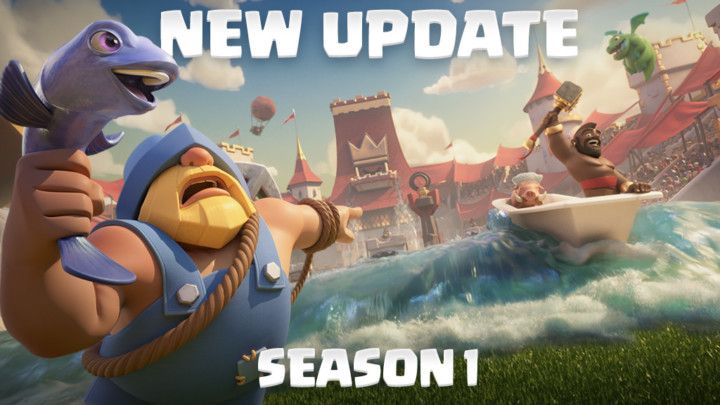 A mighty tide has swept through the Royale world, bringing with it a new Arena, new card, and new features – the biggest of which is Pass Royale!

You can find Tower Skins in your Emote Deck tab.

(The Season 1 Tower Skin & exclusive Emote can only be earned in Season 1 – this is your only chance to get them! If you unlock them, you get to keep them forever.)

Pass Royale is packed with extra rewards, including chests, cards, gold, and more!

Queue up your next chest to start unlocking automatically!

Your player name gets a cosmetic change, unique to Pass Royale.

All Pass Royale chests get Lightning Strikes – Strikes give you more chances to get the cards that you want!

With the introduction of Pass Royale, we have changed how Crown Chests work.

Crown Chests still require 10 Crowns to open, so no change there!

THE FLOOD HAS ARRIVED…

The Flood has taken over – the home screen of Clash Royale has been updated!

Bringing a new grappling mechanic to Clash Royale, Fisherman pulls enemies towards him (damaging them in the process) and then slaps them with his trusted fish, causing melee damage and adding a slow effect. He can also pull himself to the nearest enemy building or Tower!

Take To The Skies

A flooded arena proves to be a great battleground. Only air troops are allowed in this game mode!

This Fisherman doesn’t take sides. Until you capture him! The newest troop sits in the middle of the Arena, and will join the side of whoever destroys his shield first.

We are making some big balance changes this update! Below are all the juicy numbers…

Since we launched Clash Royale in 2016, cards with a Range under 2 have been classified as ‘Melee’, but many cards had dramatically different ranges that were not clearly communicated.

With this update, melee cards have been classified as Melee: Long / Medium / Short. This will help clear up seemingly ‘random’ interactions where one troop attacks first but it’s not obvious why.

For reference – a tile refers to the squares you see on the Arena that affect unit placement, range, and more!

All other troops with a range of 0.8 tiles or less will retain their current range. All of these troops will be classified as being Melee: Short.

Draft tables have been updated to guarantee a Building-targeting troop for each player
Cards have been rearranged in choices to eliminate direct counter situations (like P.E.K.K.A vs. Giant drafts)
Some cards have been removed from all draft selections due to polarizing match ups

We’ve seen your feedback! Quests have been updated.
We now have a wider variety of Quests of varying difficulty
Higher difficulty Quests have higher rewards
Removed quests like ‘Win a 1v1 Battle 900 times with Heal and Wall Breakers’
Quests are now no longer limited to specific game types – they can be completed in any game mode (except Training Camp, Private Tournaments and Friendly Battles)!